July 2002: We have been living in Uganda for over 2 years – Patrick is the MD of Uganda Breweries and gets to drive a red Landrover Discovery number-plated ‘Bell 1’ after the best selling beer in the country – Bell Lager. But more importantly, Uganda has over 1000 bird species. We (the Royal ‘we’) have to see as many of these while we are here. We cannot envisage leaving without taking every possible birding opportunity. Patrick says ‘Imagine finding out afterwards that you’ve missed a turning and so missed an important bird site’. We must research and plan. The secret is in thorough research and planning. 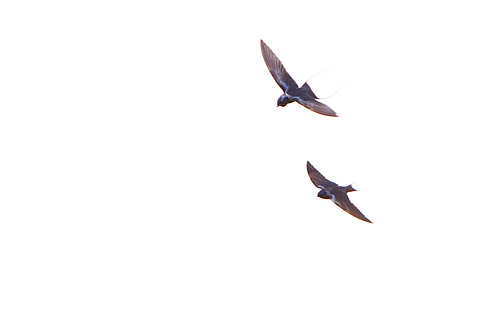 Blue Swallows, so graceful in flight

All this tires me out but I go along on these trips because I enjoy the adventure. I love the little interludes, memorable vignettes, the sights we see, the scenery, and yes, the birds too…..

This weekend it is Sango Bay – an identified Important Bird Area, and the only place in Uganda where the rare and beautiful Blue Swallow can be seen.  They stop over here in their hundreds on their way to their summer holiday further south.  Patrick has read about it in a pre-90’s Report.  No one we know has been there. Our birding friend, Malcolm Wilson, ‘Mr Birding’ in Uganda, has not even seen them, so we plan this trip together. I invite a French couple, Alex and Eric. They are what I call ‘hovering on the fringe of birding’. By that I mean Eric is keen but relatively new to birding and Alex thinks she is keen but she hasn’t yet had the experience of sacrificing luxury, comfort and even sanity to see a desired species. After the weekend I think she feels differently about birding.

So, we pack: tents, water, charcoal, food, mozzie repellent. Malcolm’s task is to find out where we can camp. Some local Ugandan researchers have been there before. He obtains extremely sketchy information. In these circumstances I like to have very specific directions, a map, names of people who have stayed there before, local people that can help in case we get lost, before I feel at all comfortable. Malcolm does not need this. He is relaxed about the weekend.

We drive to Masaka, 90 minutes to the west of Kampala, where we stop for a ‘short call’ at the Highway Inn. The toilet is reasonably clean, a tiled pit latrine style loo. Luxury on these trips is measured by toilet standards.

Then on to Sango Bay, 20 or so kilometres north of the Tanzanian border on Lake Victoria. It has rather a grizzly recent past, I find out at a dinner party I go to before the weekend. During the massacre of the Tutsis  in the Rwandan civil war in the early 90’s, the dead are thrown into the River Kagera, which flows eastwards into Lake Victoria. There is a belief that the Tutsis are Nilotic people originating from where Sudan now is, and that by putting the bodies in the river, the souls would eventually return to the home of their ancestors via Lake Victoria and the Nile River presumably. Another story is that the Hutus believed by killing the Tutsis and throwing the bodies into the river, they will return to their ancestral home and this will rid Rwanda of Tutsis. In reality the RPF (Rwandan Patriotic Front) won the war and the Tutsis returned to power. At the time the UN were involved in a recovery project to retrieve the bodies as they floated into the Lake – about 10 000 bodies – and they estimated that another 10 000 had already entered the Lake before the project started. All the recovered bodies were buried in a mass grave in Uganda.

A Scottish muzungu directing a road project gives us precise directions to the final turnoff. After that things are a little unclear. We are delayed by another road works project that blocks the road completely without prior warning. At least it gives us time to change a flat wheel. A lengthy process as both our jacks do not work and we have to use Eric’s jack. Patrick all the time vowing to throw out jacks, tyres, and driver when he gets back to Kampala. In the next week he does in fact change all the tyres to ones with very large treads almost guaranteed not to pick up nails and thorns. I have come to expect both flat tyres and rain whenever we go on one of these expeditions, and so I am sceptical. Time will tell I say.

We ask at a local village about camping. The villagers look blank but suddenly remember they know of a campsite where muzungus have stayed, and they can show us the way if we give them a lift. We have no room in the car so we decline. I am relieved because what Malcolm and Patrick did not notice is that while one of the men pointed excitedly to the right, the other pointed just as excitedly to the left. I doubt we would have found ’the’ campsite with their help.  At the next village a faded and battered sign points to The New Modern Hotel. That none of us gets excited about the promise in the name is testimony to the fact that we have been in Africa for long enough not to get our hopes up too quickly. The ‘new’ and ‘modern’ probably relate to 40 years ago, for now there is no sign of anything even resembling a hotel in the neighbourhood.

We drive to the end of the road, a gloomy, dirty, fishing village, dead-fish-smelling and inhabited by many Marabou Storks, fat from a diet of fish innards. On our way back, we see the magical Blue Swallows and stop. Malcolm puts up his mist nets, fine and soft, to trap the birds and ring them for scientific research purposes, before releasing them again. This I am assured does not harm the birds at all, although one swallow sits, dazed, for about an hour before he plucks up the strength to fly off again. The Blue Swallows are fast, low flying, arcing gracefully, midnight blue. Most are missing their tail streamers. These will grow back, like new holiday outfits, when they’re ready to fly on south.

Still no sign of a campsite. Malcolm no longer cares. He is without his girlfriend and is happily playing with his birds and nets. He seems to be immune to the multitude of mosquito bites on his legs, neck, face, head, arms. These are the largest mosquitoes I have ever seen. I keep reminding myself that they are not Anopheles mosquitoes as they are far too big and noisy and they seem not to mind whether it is day or night. The Anopheles only comes out after sunset and is small, quiet and deadly.

Eric and Patrick have wives with them. They are under pressure to set up camp. Patrick identifies a possible site in the middle of an open expanse of grass where a few clumps of trees sprout. Eric asks, too casually, what I am thinking: ‘will it be okay to camp “just anywhere”?’.  We don’t know but we have no option at this stage. As we drive closer to the clump of trees, through ditches and long grass, we see that the smaller shrubs next to the trees are in fact many children – now staring open-mouthed at the two large muzungu-filled 4×4’s heading towards them.  ‘This is not going to work’ we decide, and retrace our tracks to another clump. As we erect our tents, the children arrive and just stand, gawking at what must be to them extremely odd behaviour. Alex admits nervously that this is the first time she and Eric have camped out in the open in the middle of “just anywhere”. She walks towards a nearby group of trees to use as a screen for a short call, but finds another group of people there.  Eventually desperation causes her to squat behind the vehicle. We say we won’t look and this is normal behaviour to the locals so they don’t look either.

Eventually the children loose interest and go home. There is no moon so there is little chance of being disturbed during the night. Our campfire is bright and comforting and we sit for a while after our meal, chatting companionably and sharing Eric’s single malt whisky. One by one we slowly peel off to bed as the yawns increase and the night grows silent.

Patrick and I have a small tent for one night stays and a larger one for longer stays and lion country. We have the little one tonight and are quite cosy and secure inside, listening to the mozzies buzzing around outside all night long. We do not get out of bed (or rather ‘up’ from bed, as we are sleeping on the ground on our self inflating mattresses) until the sun is up and the worst of the mosquitoes have gone away. Alex gives it another 2 or 3 hours just to be sure, and when she does emerge, she gets bitten on her little finger. Malcolm has been up since pre-dawn, and he woke us to show us the extremely rare and elusive Whitebellied Kingfisher that he netted. This is one of Patrick’s target birds for the trip – very unusual to see it outside the forest if at all according to The Report.

Breakfast is tea and biscuits.  We pack and move on. At Masaka we stop to ask Eric and Alex whether they would like to join us for lunch at the Highway Inn, but Alex is asleep and Eric looks as though he might be under pressure to get home to a clean bathroom, flush loo and normal food. We have lunch: Malcolm has liver and chips, Patrick sausage and chips, and I have a pea-filled samoosa. We talk about going out for a nice supper in the evening.

Along the road, as we leave Masaka, the fish stalls start. Here one can buy a large, fresh tilapia for 1500 or 2000 Uganda Shillings (about a dollar). Patrick loves to do this. Francis (our cook) is less keen about the idea because he is the one who has to clean and fillet the fish at home. As we stop, the vendors come running, holding up their fish and shouting their ‘special for you’ prices. Smoked lungfish, rolled up like an eel, and fresh catfish are also on offer. Patrick chooses 3 fish and pays 15 000 Uganda Shillings. Way over the top, I say, about 150% too much. But Patrick hates bargaining, and the lucky vendor goes away leaping with excitement at his coup for the day. Malcolm tries to persuade Patrick to hang the fish outside on the front radiator grill as is the custom here. Quite sensible I think as the fish smell stays outside and the fish is kept cool in the passing wind.  But this he feels is too ‘local’ and not quite fitting for Bell 1, and he does not fancy his fish being covered in red dust either.

Back home at Mbuya Hill in Kampala, even the stingy shower-in-a-bath seems like luxury to me. I am too tired to eat let alone go out and eat, and we collapse in front of TV.  Patrick says ‘ a very successful trip! One lifer and the Blue Swallow again’. I am too tired to agree or disagree, and secretly vow to stay at home when the next trip with the ‘birding boys’ comes up.

Epilogue: we left Uganda at the beginning of 2003 to return to Cape Town, with many happy memories of the people, the birds and so much more. We have kept in contact with several of the local bird guides and now work with them in promoting Uganda as a safe and exciting African destination.

For more info on birding tours in Uganda, contact Patrick or Marie-Louise on info@avianleisure.com and we will put you in touch with one of the local companies that we recommend