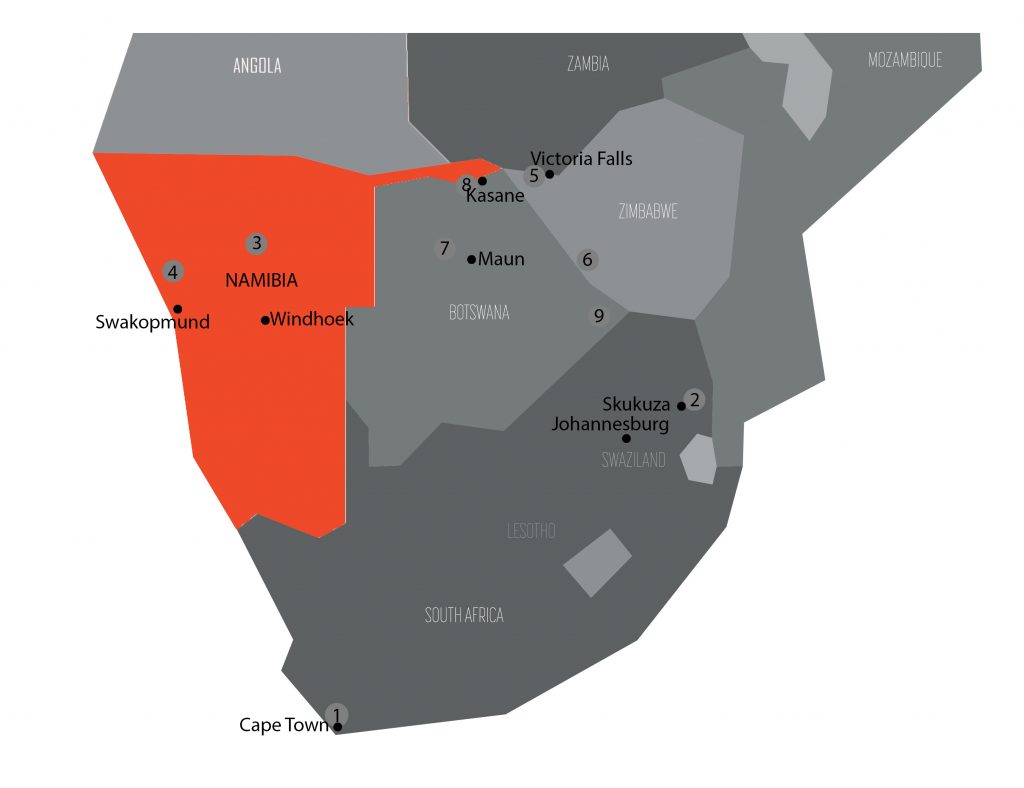 In the view of some, Namibia is a vast expanse of nothingness, a desolate moonscape holding little of interest…

But for most it is a sparsely populated amalgamation of varied and pristine landscapes, richly endowed with a fascinating variety of life forms that have successfully evolved to life within the desert dunes, gravel plains and semi-arid savanna biomes. These distinctive habitats, as an ecological collective, make Namibia a ‘must do’ destination for any lover of the vast outdoors and all of nature therein.

Focus, outside of the lunar plains and deep-cut canyons in the far south and evergreen teak forests and wetlands of the extreme north, is on the central interior-desert ‘jewel’ of the Namibia crown of widely fascinating wildlife encounters and scenic vistas beyond compare.

This is ‘Big Sky’ country, where horizons extend to infinity and mesmerizing night skies form a canopy of reflective starlight, and rugged mountains of ancient volcanic origin give way to razor backed red desert dunes and quartzite gravel plains, extending westwards to the thunderous roar of the surf on the infamous skeleton coast of lost ships and hidden treasure..

This is home to the ‘living desert’ of small things as beetles, spiders and scorpions, geckos, lizards and side-winding snakes within the complex coastal dune system compete for daily existence, through to the magnificent black-maned lions, leopards, cheetah and herds of oryx, zebra and springbok that interact with one another for survival within the primordial wilderness of the Etosha National Park.

So whether meditating to the hiss of billowing sand on the crest of a razor-backed dune or engaging the mesmerising eye of a desert chameleon or returning the stupefying stare of a black rhino at a floodlit waterhole to the resonance of a roaring lion in the far distance, Namibia is one of the last remaining wilderness areas worthy of serious consideration.

So why wait any longer to partake of a safari on the wild side of Namibia while the opportunity to visit this still pristine wilderness remains an environmental reality.