There are few moments in the bird world that eclipse the awe-inspiring sight of a spectacular Bearded Vulture careening majestically in albatross-like flight across the sheer face of a precipitous basalt cliff high in the mountainous terrain of the Great Escarpment in eastern South Africa the Drakensberg. 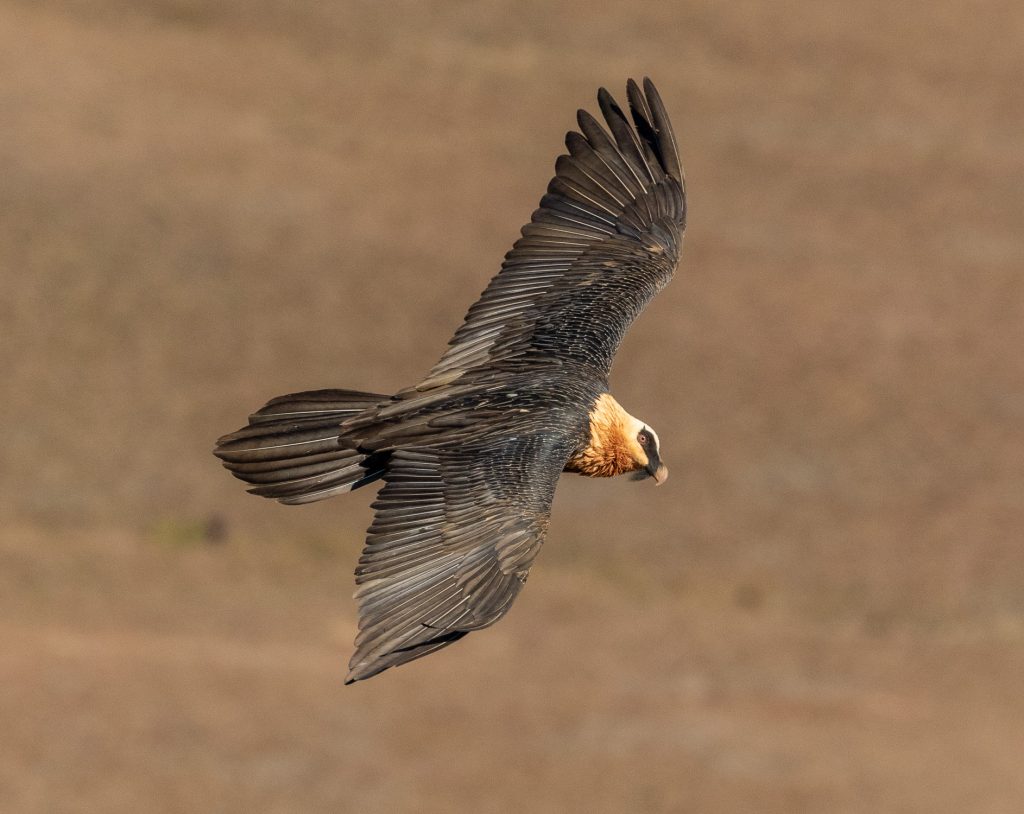 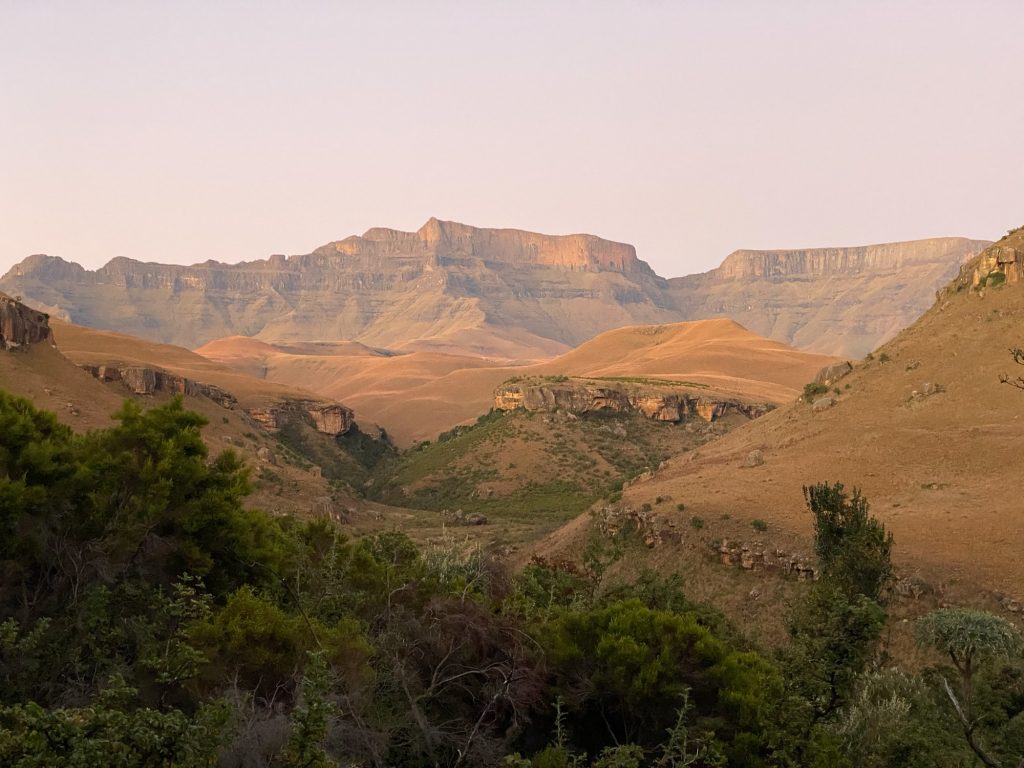 Thirty years back I sat near a foraging group of Gelada Baboons on the very edge of a ravine high above the meandering Blue Nile in Ethiopia, when seemingly out of nowhere an adult bearded vulture appeared on the updraft to hold station alongside me for what seemed a lifetime until the moment of intensive scrutiny and perceived curiosity eventually gave way and the magnificent bird dropped from view into the gorge…

Several times since, on trips to various parts of Lesotho, I have been captivated by the sight of bearded vultures soaring and gliding on long pointed wings and wedge-shaped tails in masterly flight, reminiscent of a large falcon, as they circled high above the surrounding mountains and deep-cut valleys typical of the rugged topographical terrain of the ‘Roof of Africa’ over which this majestic almost ethereal bird presides.

More recently the Giant’s Castle ‘vulture hide’ afforded me ample opportunity of engaging photographically with several of these huge birds across the age classes as they interacted aerodynamically with one another in concert with a consort of White-necked Ravens and Jackal Buzzards frequenting the feeding station. 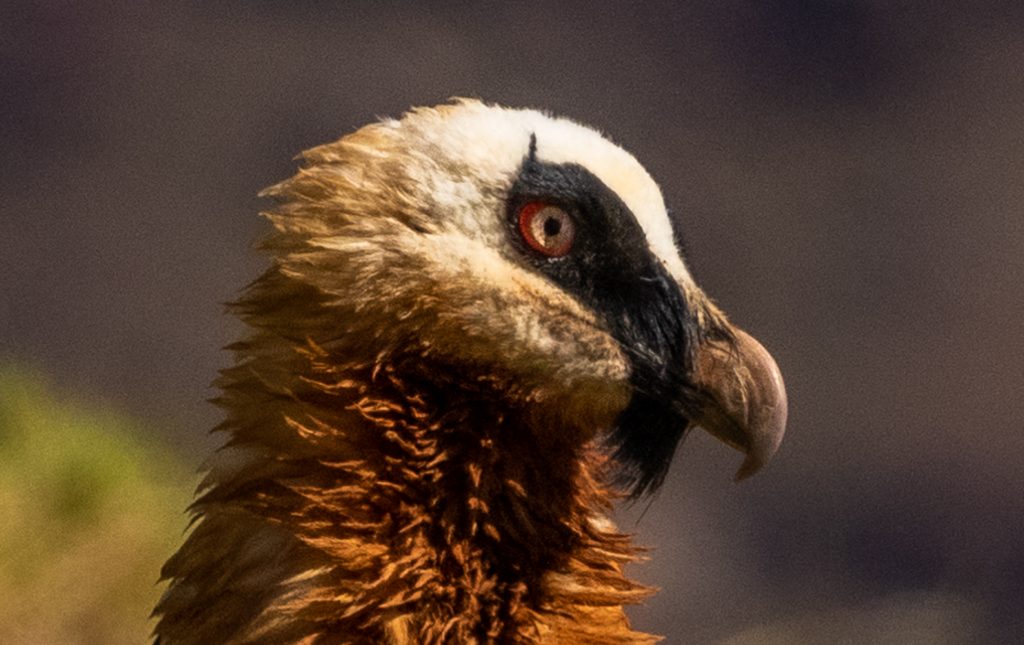 All such activity in perfect morning light accentuating the unique facial features of this spectacular vulture, complete with yellow-iris and conspicuous scarlet eye-ring surrounded by a mask of black feathers and a goat-like beard trailing below its impressive hook shaped bill, well suited for disarticulating bones and cutting through tendon and soft tissue. 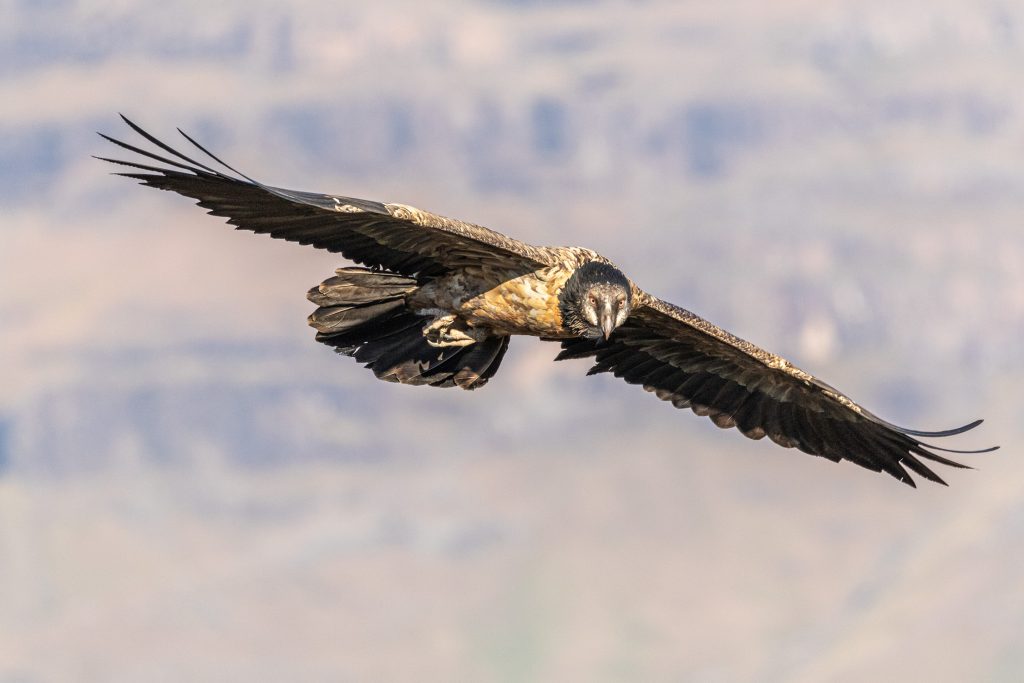 On the ground the bird exudes a self-confident sense of dominance as it waddles about the feeding station in an exaggerated and assertive manner, neatly folded long-pointed wings extending almost to the end of the wedge-shaped tail in profile. 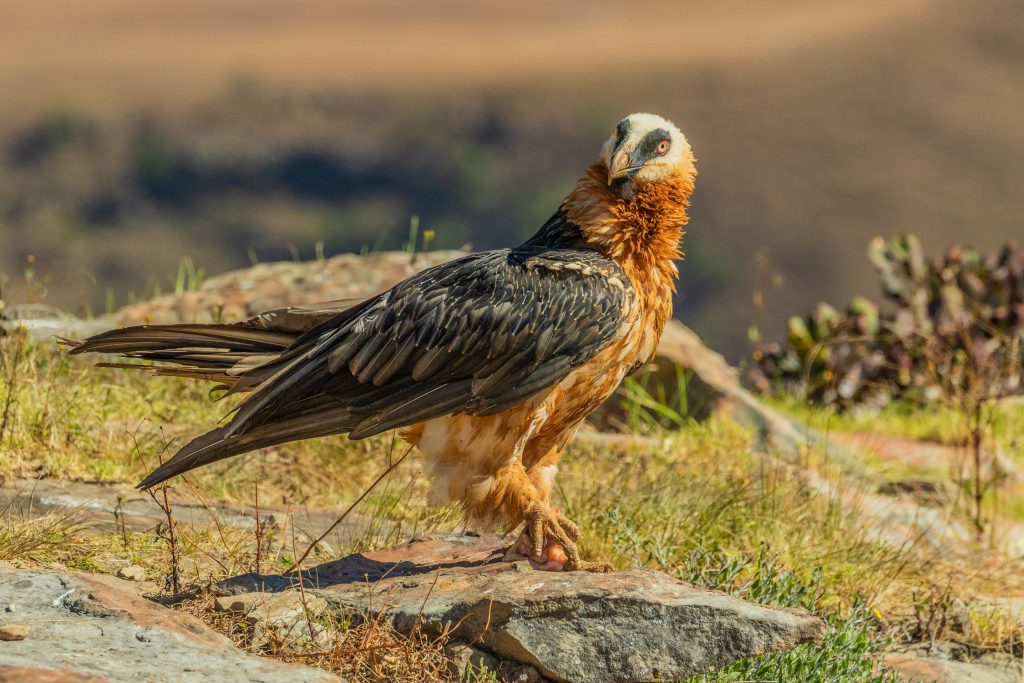 Interesting too is the enormous gape of 70mm, twice that of the Cape Vulture, enabling the bird to ingest large bones of up 250mm in length and 35mm diameter. Larger bones, weighing up to almost the same weight of the adult bird itself, are carried aloft lengthwise in the feet and dropped from a height onto a favoured ossuary for breaking the bones into digestible size. 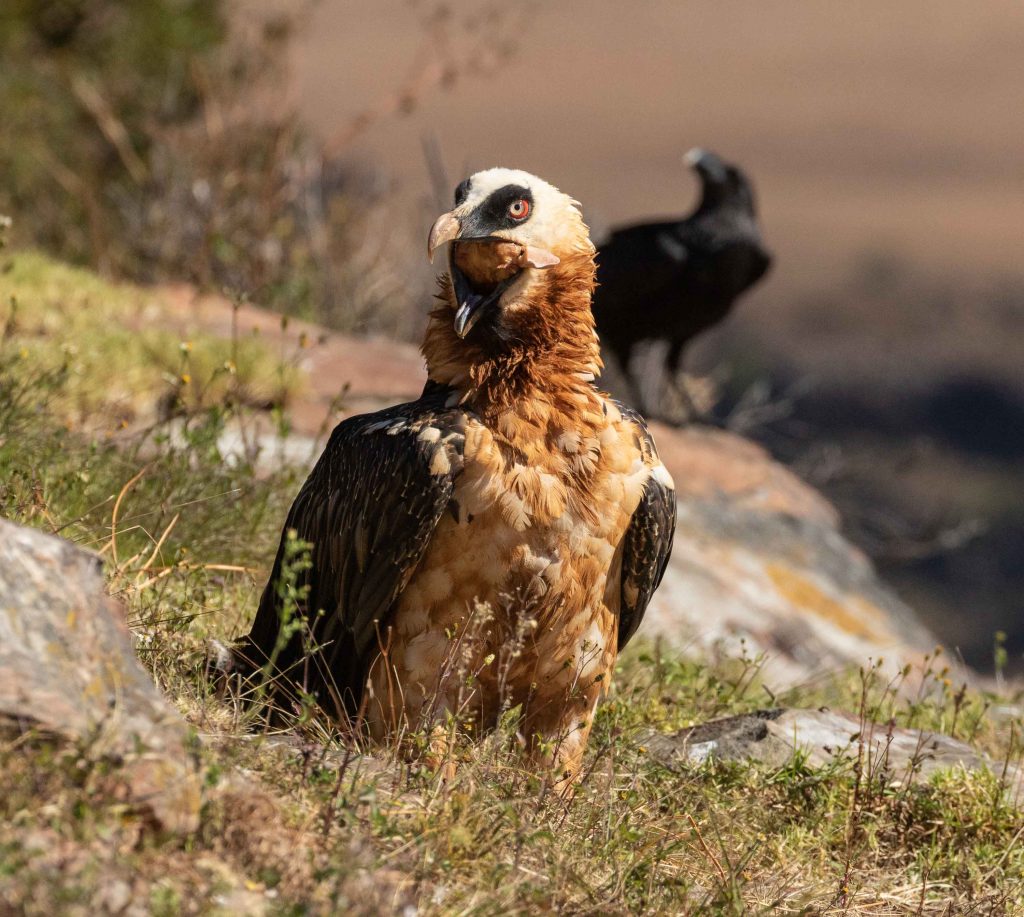 In conclusion, the honey-coloured head and neck feathers, and red oxide infused breast and belly plumage colouration, extending down the fully feathered legs, in marked contrast to the dark brown wing and back feathers, visually combine to provide the majestic aura associated with this iconic raptor of the snow-capped peaks and pinnacles of the Drakensberg Mountain range and central interior of Lesotho.

For more information on where to see these magnificent vultures, and how to plan a trip to the Drakensberg, contact us at enquiries@avianleisure.com 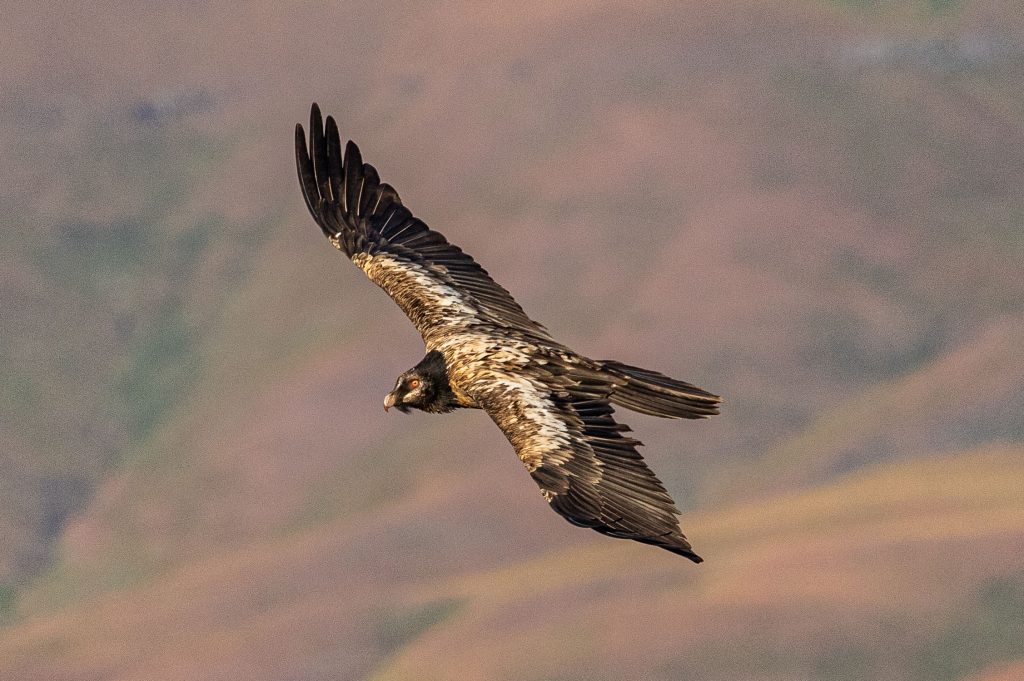 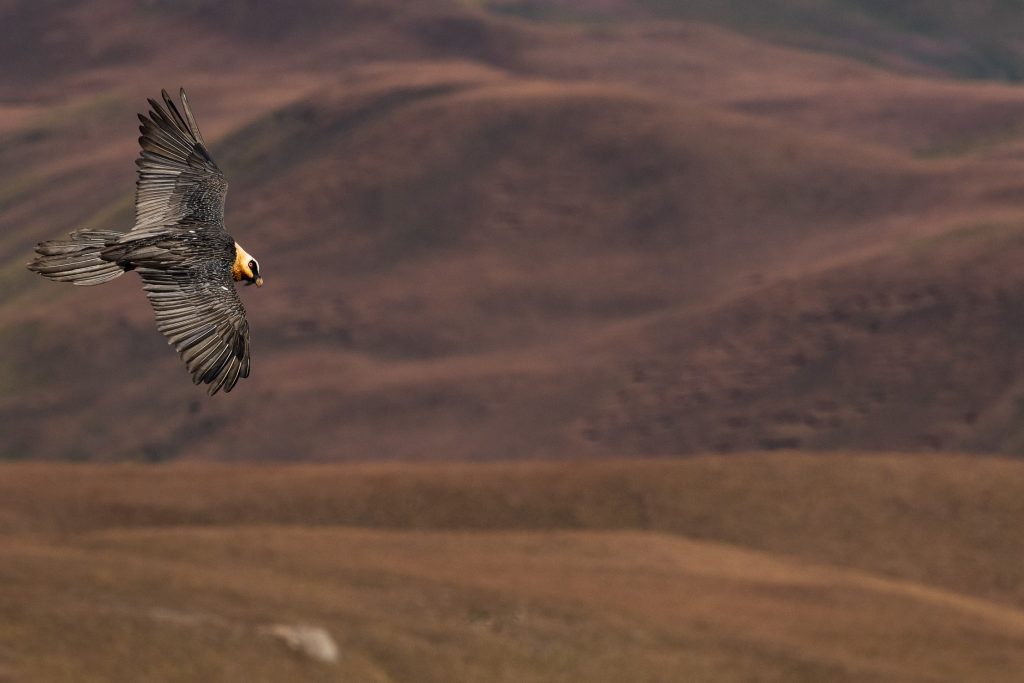 Bearded Vulture against the Drakensberg foothills 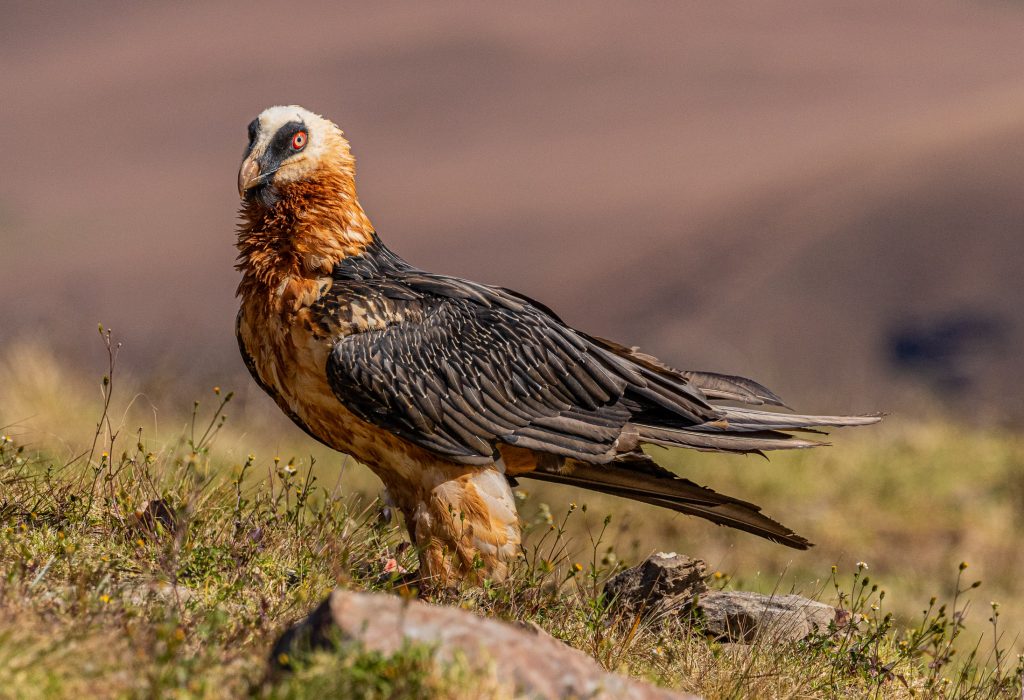 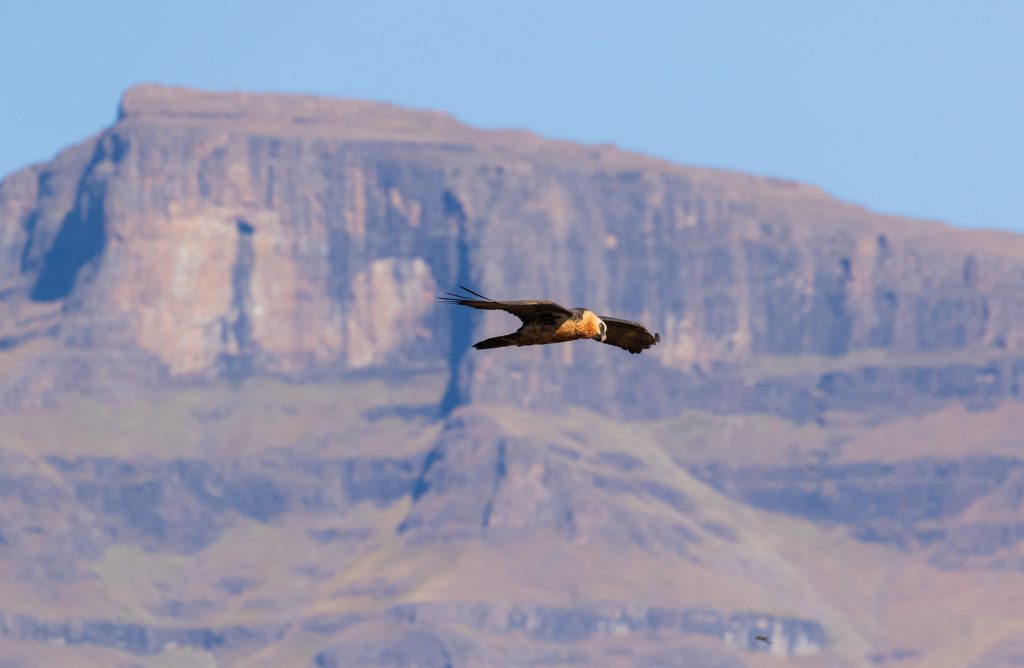